skip to main | skip to sidebar

"You're on this earth to provide a service of some kind.  That's what the good Lord made you for..."

Those words are from Paddy Moloney, founder and leader of the Irish musical group The Chieftains.  If that's the case, then I guess my service is to share my stories and somehow touch people through them.

Some people find their service early on.  Others take longer.  For me, it was years, and I didn't find it on my own.  I had a lot of help along the way, and much of that help came from public libraries. 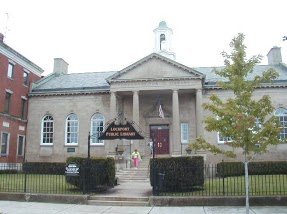 The first library I ever knew was in my hometown of Lockport, NY.  I come from a long line of voracious readers, and the love of the written word was passed along to me when I was very young.  I don't remember the first time I went to the library with my mother--a weekly trip there was just part of life, as important as the weekly trip to the grocery store.  The children's department was a single large room.  It's been renovated since then, and that room is now a program and story-time room, just part of the much larger children's department.  But even though it was just one room, to a girl with an active imagination, it held the world.  I read everything--fiction, biographies, non-fiction, poetry.  Every summer, I read far more than the number of books required to complete the summer reading program.  The librarian got used to seeing me there, and often recommended books to me.  I'll never forget the day I was allowed for the first time to go into the wood-paneled room that housed the books for junior and senior high school kids.  And there has to be a special place in heaven for the librarian who realized that, even though I was only thirteen, the borders of my literary world were becoming too confining, and let me go upstairs to the adult department, where I quickly discovered books like T.H.White's The Once and Future King, and the wonderful Gothic novels of Victoria Holt, Mary Stewart, and Phyllis Whitney.

In 1975, I married and moved away from Lockport.  In the ten years that followed, there were six moves.  Within days upon arrival in each new place, I found the public library and got a card.  In 1980, we landed in Clinton, NY.  We had a daughter by then and, following the example my mother had set for me, I began taking her to the library when she was just a few months old.  Even though it had been years since I'd abandoned children's books for adults', I quickly rediscovered and fell in love with them all over again. 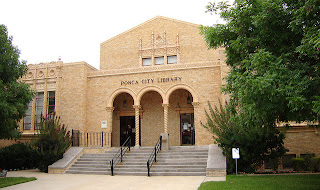 The more children's books I read, the more strongly i began to feel that I'd like to give writing them a try, and I began a correspondence course in writing for young people.  Before i finished it, we moved to Ponca City, OK, where my daughter and I quickly became regular customers at the library.  The children's librarian became a friend; we had wonderful conversations about children's books, ones we remembered from our childhood and more recent ones.  I finished the correspondence course in Ponca, knowing I'd found my calling, but not knowing where to go from there.

In 1985, we moved to the south suburbs of PIttsburgh.  A year later, author Patricia Harrison Easton began a children's writers' workshop at the Peters Township Library.  I went to the first meeting, and was a member until I moved away 18 years later.  In this group, I dared to share my very first attempts at writing.j  I honed critical and writing skills.  And I read--the "good stuff", books by the best children's writers, and the schlock, too.  And I learned from all of it.  I haunted the library, talking with the library staff in the children's department about books, asking questions, studying publishers' catalogs each season, and discovering The Horn Book, with its reviews and articles.

In 1997, I began a two-year graduate program which earned me an MFA in Writing for Children from Vermont College (now Vermont College of Fine Arts), in Montpelier, VT.  During those two years, I spent even more time at the library, taking out stacks of children's books and taking refuge when I needed quiet time to work--quiet time I couldn't always get at home.

My eighth book has just been published.  Its been a long journey, and one I hope still has miles to go.  I have spent more hours in libraries than I could ever hope to count, and inside of me I carry a piece of every one I've ever known.  They have helped me--in Paddy Moloney's words--to provide the service for which the good Lord made me.  To all of them--thank you.  I couldn't have done it without you.
Posted by Cynthia Cotten at 1:01 PM No comments:

The Next Big Thing

The Next Big Thing is a global blog tour, started in Australia, to showcase authors and illustrators and their current work.  I was tagged by the talented author/illustrator Jennifer O'Connell.  I'll answer some questions about my newest book, then pass the Q&A along to two authors who'll pick up the tour next week.

The Book Boat's In 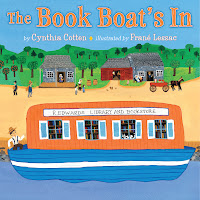 Where did the idea for the book come from?  From a newspaper article written by Doug Farley, director of the Erie Canal Discovery Center, in Lockport, NY, about a floating library/bookstore that traveled the Erie Canal from the mid-1830s to the mid-1850s.

What genre does your book fall under?  Picture book.

What actors would you choose to play the parts of your characters in a movie rendition?
Hmm.  That takes a bit of thought.  Okay, here goes:
Jesse:  Jared Gilmore (Henry on Once Upon A Time)
Mr. Edwards:  Richard Thomas

Pa:  David Tennant  (Yes, I know he's Scottish, but he could have immigrated.  Besides, this is my fantasy casting.)
Ma:  Drew Barrymore
Mrs. Blake (at the general store):  Patricia Heaton

What is the one-sentence synopsis of your book?  A boy finds a book he loves on a floating library/bookstore that travels the Erie Canal, and has just one week to earn the money to buy the book before the boat comes back on its last trip for the season.

Who published your book?  Holiday House.

How long did it take to write the first draft of the manuscript?  Probably about a month.

What other books within the genre would you compare your book to?  From the angle of a boy wanting something and how he gets it, perhaps Charlie Needs A Cloak (Tomie dePaola); from the historical angle, maybe Ox-Cart Man (Donald Hall).

Who or what inspired you to write this book?   I was fascinated by this early version of a bookmobile, and I remembered the first time I saved my money to buy a book I wanted.

What else about the book might pique the reader's interest? The Erie Canal itself, and how it opened the way for westward expansion.


Thanks for stopping by!  You can learn more about me and my books at:
www.cynthiacotten.com

Now it's my turn to tag a couple of authors to pick the tour up next week, 18 April.  Be sure to check them out! 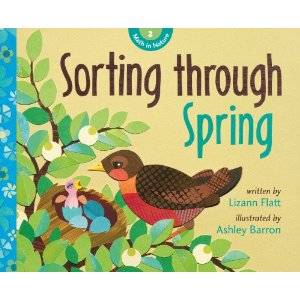 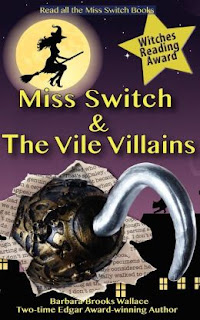 Posted by Cynthia Cotten at 9:25 AM No comments:

I think a two-year hiatus is long enough, don't you?

Just as a bit of a catch-up--since my last entry here, I've had poems included in several books, including:

The Poetry Friday Anthology: Poems for the School Year with Connections to the Common Core, selected by Sylvia Vardell and Janet Wong (2012)

The Poetry Friday Anthology for Middle School: Poems for the School Year with Connections to the Common Core, selected by Sylvia Vardell and Janet Wong (2013)

And--ta-da!--two days ago was the official birthday of my new picture book, The Book Boat's In, illustrated by Frane Lessac, published by Holiday House. 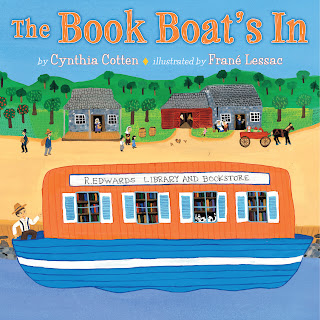 It was inspired by a floating library/bookstore that traveled the Erie Canal from the mid-1830s until the mid-1850s.  It was so much fun to write, and the folks at Holiday House have been wonderful to work with.  I'm hoping this will be just the first of many books with them.

So--that brings us up to speed.  Onward from here.

Posted by Cynthia Cotten at 8:45 PM No comments: